Google has posted a new Doodle, Google logo, on its home page of the James Webb Space Telescope, for it taking the deepest photo of the universe ever taken.

The James Webb Space Telescope is a space telescope designed primarily to conduct infrared astronomy. As the most powerful telescope ever launched into space, its greatly improved infrared resolution and sensitivity will allow it to view objects too old, distant, or faint for the Hubble Space Telescope, Wikipedia explained.

Google wrote “Today’s Doodle features the deepest infrared photo of the universe ever taken as well as other initial images from the JWST.”

Google’s search results page for this query also is themed up: 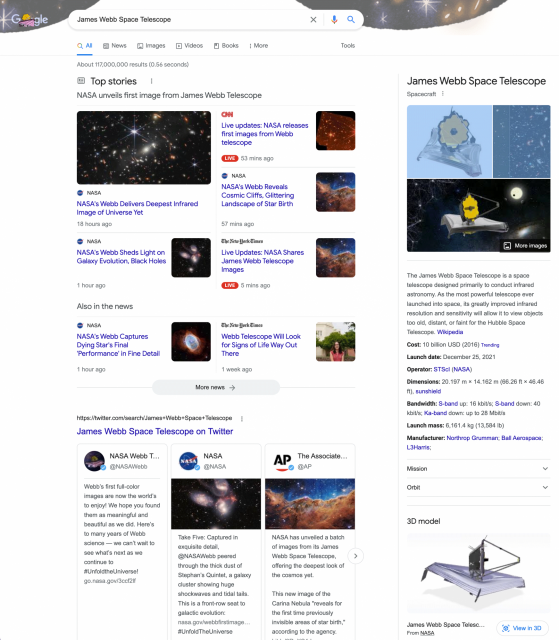 A picture is worth a thousand worlds. Today’s Doodle celebrates the deepest infrared photo of the universe ever taken by NASA’s James Webb Space Telescope—also known as the JWST or Webb—a scientific phenomenon and one of the biggest engineering feats of humanity. It is the largest, most powerful, and most complex infrared telescope to ever be put into space—and the largest international space endeavor in history! Today, six months since take off, NASA released Webb’s first operational images unveiling new depths and worlds.

The JWST is named after NASA’s second administrator, James E. Webb, who led the Apollo missions that landed the first humans on the moon. The telescope was launched from the Guiana Space Center in Kourou, French Guiana on December 25, 2021 and took a month to reach its orbit at 1.5 million kilometers (940,000 miles) from Earth. The launch was made possible through the collaboration between NASA, the European Space Agency (ESA) and the Canadian Space Agency (CSA).

Thanks to images from the JWST, astronomers will now have the opportunity to study every phase of cosmic history, which spans a massive 13.5 billion years, and the mysteries beyond our galaxy. NASA aims to explore the early universe, multiple galaxies over time, the star life cycle and other worlds with Webb. The JWST will even be able to observe light from galaxies that formed 400 millions years after the big bang, and detect oxygen and organic molecules on other planets.

Long throughout history, humans have wondered, “How did we get here?” and “Are we alone in the universe?” The JWST will allow us to explore these questions and distant worlds that orbit other stars and study our solar system extensively, producing the sharpest infrared images ever taken by a space telescope. It will open the doors to more scientific breakthroughs in the future, shining a new light on space, time, and celestial bodies we’ve yet to discover.

Today’s Doodle features the deepest infrared photo of the universe ever taken as well as other initial images from the JWST. Explore them below!