Today marks the two-week and one-day mark since the Google helpful content update started to roll out and by the time I am writing this and when it was published Google has still not noted that the helpful content update is done rolling out. Plus, as I noted yesterday, we are now seeing more significant volatility and fluctuations as of yesterday and more today in the Google Search results.

The page that will inform us of when it is done rolling out still says “Released the August 2022 helpful content update. The rollout could take up to two weeks to complete.” It does not have a date on when it is done.

John Mueller of Google was asked about this and he replied this morning on Twitter saying, “These kinds of rollouts take up to about two weeks. Sometimes they’re a bit slower, sometimes a bit faster.”

These kinds of rollouts take up to about two weeks. Sometimes they’re a bit slower, sometimes a bit faster.

Since 17-18.00 hrs UK time yesterday (Wednesday) I have seen a noticeable reduction in traffic to my global site returning so far to the levels of July and the first 2 weeks of August.

confirmed, we see a big trop today about 40%.

Something’s definitely showing on the volatility trackers. Rollout should be just about done by now.

Traffic’s up +20% today but could be unrelated.

Mostly the same as usual for our travel information site, although we’re up a bit compared to the peak summer season. Normally we’d see the beginnings of a seasonal decline after September 1. (This probably has less to do with Google than with pent-up travel demand.)

Sept 8th and a mega group of sites, each with 250k auto-generated pages of mostly scraped content receiving between 2 and 5 million monthly visitors from search…. have not been affected yet. C’mon Google!

My traffic was very strong until noon EST, then dropped off a cliff until 3pm EST…so I think yes it’s all about the Queen’s passing.

Again, this is more chatter than I have seen in the past two weeks, just in the past 24 hours.

And now the tracking tools are also showing big swings, again, the previous two weeks were super calm according to the trackers but in the past day, the tools are picking up on volatility. 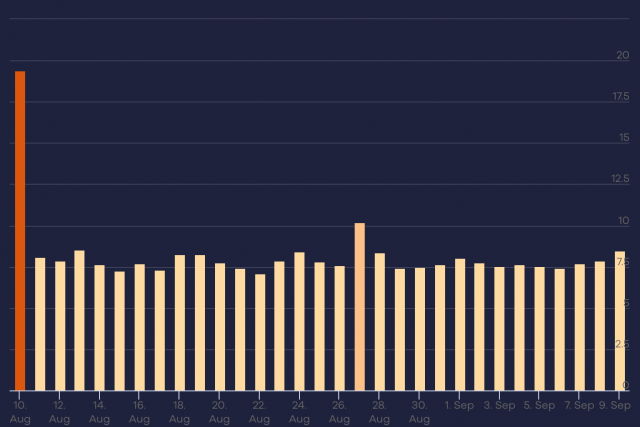 So is this new movement in the past 24 hours related to the helpful content update or is it something else? Did Google decide to turn up the dial at the tail end of this rollout? I am not sure – but I figured I’d share what I am seeing from the SEO community.

Earlier this week we reported that Danny Sullivan even said himself it was not a huge shakeup but it was big in terms of the direction Google is going with ranking content. Of course, we’d (well, I would, not sure you all would) like to see the “direction” or the message Google is trying to set and see Google act on it in a more substantial way.