After maybe four or five days of calm, we are seeing new signs of more larger Google Search ranking algorithm update tremors and volatility. This new one seems to just be kicking off, some of the tracking tools are already picking up on it and we have chatter from within the SEO community about a possible update on June 27th and today, June 28th.

I am not sure if you are noticing it yet but you might soon, when you check into your analytics this morning. Although, real time Google Analytics is a bit buggy this morning, at least at the time of publishing this.

As a reminder, we saw large unconfirmed fluctuations around June 23rd, June 19th and 20th, also the Google May 2022 core update began rolling out on May 25, 2022 and was officially pronounced complete on June 9th but we saw big tremors before and after the start and end date of that update.

Note: If you are ever curious if there was a Google update, don’t forget to check my microsite – Was There A Google Update.

The chatter within the SEO community is just starting, I think overall the community is tired but here is what I am seeing thus far from both WebmasterWorld and within the last post here:

Sat and Sun were both average, but Monday is down massively so far. Search is down 31% by 11am, and USA is down 52% from an average Monday. My visibility increased according to the trackers I use…

Also seeing big drops of 50% or more for many of my top referring countries on a rolling basis from June 13th-17th…Australia, UK, Canada, UAE, Germany…in some cases (UK and Germany) the traffic bounced back after about 4-5 days, in other cases it has has remained at the new lower level. Has anyone seen this big drop in mid-June?

Global site Saturday was average, Sunday 38.7% and it strggled to get there and had zero interaction with potential clients. For those who work Monday to Friday do remember not all countries have your working hours and days.

UK dedicated hotel / pub site with a festival weekend Saturday + 175%, Sunday +219% driving the highest traffic figures of the year and also the highest income of the year.

Whilst we expected increased traffic to the UK site it was still surprising considering that, realistically, it is a local event and just who was looking at the site as several thousand who passed through the venue and were enjoying themselves? After years of organsing this event every time it exceeds all expectations, more money than ever was raised for the charity and in 15 years we were again blessed with the best weather.

So, one site down, no realworld business, one site up, loads of realworld business. Talking to Joe Public over the weekend was very interesting. Saturday night was a pre-pandemic night seeing people we hadn’t seen since early 2020. Sunday saw loads of families supporting the charity and enjoying the weather however many did make the point that they were being much more careful with their spending “just in case”.

A new update has started…

I think he’s saying that there seems to be something going on today. I’m seeing changes too.

Seeing similar patterns in the UK

The tracking tools are picking up on changes also this morning, we are seeing some of the tools spike again.

SERPwoo is super high for SERPwoo: 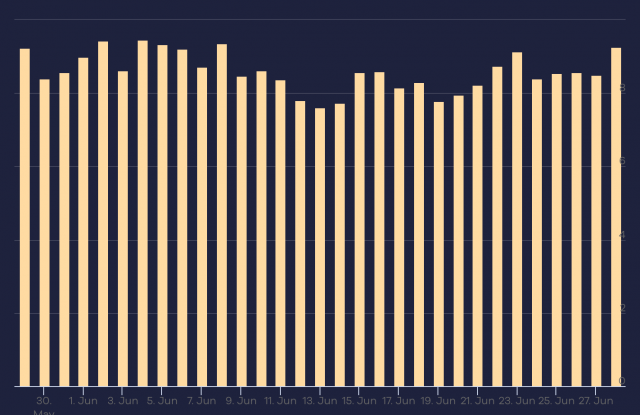 So there may have been another unconfirmed update in the past 24-hours or so.

What are you all noticing?