As we have reported, so far, the Google helpful content update seems pretty minor in terms of what SEOs and tools are picking up, despite what we all thought would happen. Keep in mind, that the update is not done and we do expect more from it. A recent poll by Aleyda Solis confirmed that, showing that only 20% of SEOs noticed ranking changes, either positive or negative, since the update.

And I bet a good percentage of that 20% are incorrectly filling out the poll, either not understanding the poll or attributing the ranking changes to the helpful content update when it is unrelated to that update. Of course, there is no way for us to know.

Here are the poll results: 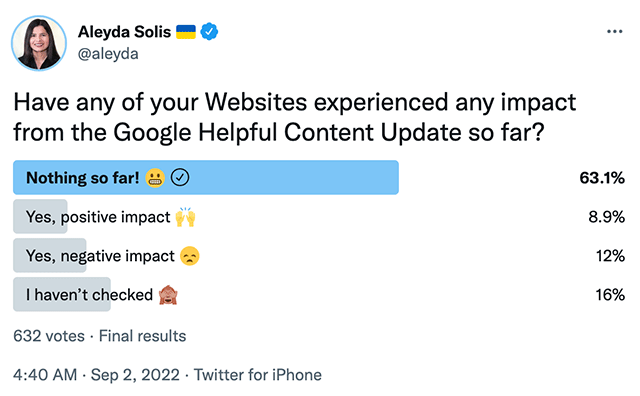 This does jive with what I am seeing in the SEO forums and SEO Twitter space. But again, I also think those who are noticing changes, might not be related to this specific helpful content update. Instead, it might be related to something else. We all know many variables outside of a single update can cause ranking changes in Google Search.

I’ll keep you posted on what I see, but so far, this update seems pretty tame, even as of this morning.