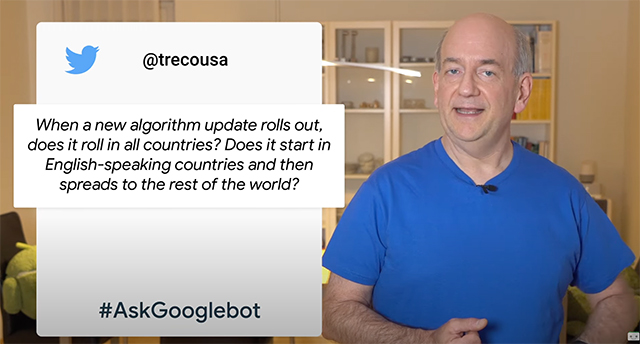 You probably all know the answer to this question, since we covered this countless times. But John Mueller of Google made a super short official Google from Google saying some search algorithm updates roll out globally and some are regional or language specific at first.

Here is what John said in this video:

Today’s question comes from Spain and it asks if algorithm updates roll out globally or individually across countries or languages?

As someone in a tiny country I like that question so thanks for asking.

Well I’d love to have a simple yes or no answer here, the reality is much more complex.

In general, we aim to make our algorithms as globally valid as possible. Not having to make variations for countries and languages makes them easier to test and maintain.

That said sometimes we have to pick a country or language to focus on first, this allows our engineers to fine-tune the algorithms in those cases. We try to start with a language or country that’s most relevant to the algorithm. That can be English but not always.

When relevant we mention this in our announcements as well and then once we find that the algorithm is working as expected over time it’s usually expanded to other countries or languages.

So in short, while we try to make everything as global as possible, the rollout of bigger changes can vary.

Here is the video if you want to watch it: